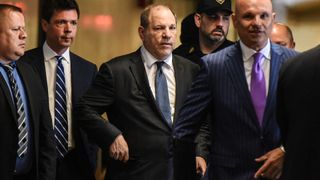 Hulu has released the first trailer for Untouchable, its documentary on Harvey Weinstein and how he utilized his power over decades to enable his widespread sexual abuse.

Some of his 80+ accusers tell their stories in the upcoming doc, outlining his methodology and the fallout from their trauma. Former colleagues also speak up, with one saying, “He scared people in the same way a gangster would.” The reporters who broke the stories are also interviewed, providing an all-encompassing look at one of Hollywood’s greatest scandals.

The trailer is devastating to watch, but necessarily so in order to expose just how sinister and far-reaching his actions were.

Harvey Weinstein Will Spend the Rest of His Life in Jail
MoviessponsoredMarch 11, 2020