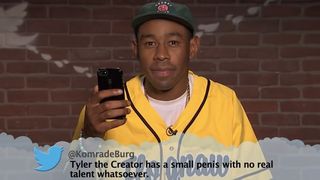 Jimmy Kimmel’s much loved “Mean Tweets” segment has returned, and this time, a handful of rap’s biggest stars have been put in the hot seat to face some of Twitter’s cruelest jabs.

As always, users didn’t hesitate in launching their honest opinions. Pusha-T takes his criticism on the chin when his braids are compared to that of toddlers, while the likes of Eve, Remy Ma, and Lil Wayne respond to their tweets seemingly unphased. There’s also an appearance from Tyler, the Creator, who surprisingly handles a rather insensitive comment in a calm and collected manner.

Previously, the cast of Avengers: Infinity War were put to the “Mean Tweets” test. Watch below.

In other news, Tyler, the Creator, Syd, and Hodgy reunited for an Odd Future set.

Pusha T & Tyler, the Creator Are Making Music Together
MusicsponsoredMarch 25, 2020