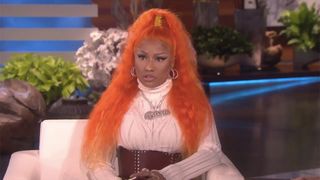 There’s a whole timeline of drama surrounding Nicki Minaj‘s latest album Queen, but the beef between her and Travis Scott seems to burn brighter each passing day still. On the latest episode of Ellen, the reigning queen of rap refused to hold back her feelings toward Scott in regards to trailing behind him on the charts.

Minaj explained how she wasn’t angry about her album landing at No. 2, but she felt cheated because Scott went around selling music to get ahead of her. “I felt like I wanted to punch him in his fucking face,” she said. “It’s not anger, it’s what’s right and what’s wrong and what’s fair.” Minaj went on to argue about how his strategy of profiting off merch and tour passes was like getting beat at a game that she has no interest in playing.

During the talk show, she also opened up to DeGeneres about her complicated love life, the biggest takeaways that she learned from her previous relationships, and the personal growth that she has experienced from being single. Later on, Minaj surprised a few of her biggest fans with scholarships to pay off their student loans. Watch the other clips in the videos below.

In other news, Rihanna looks stunning on the cover of ‘GARAGE’ magazine’s latest issue. Peep all the details right here.

A$AP Rocky Says His Beef With Travis Scott Is “So Played Out”
MusicsponsoredOctober 16, 2019