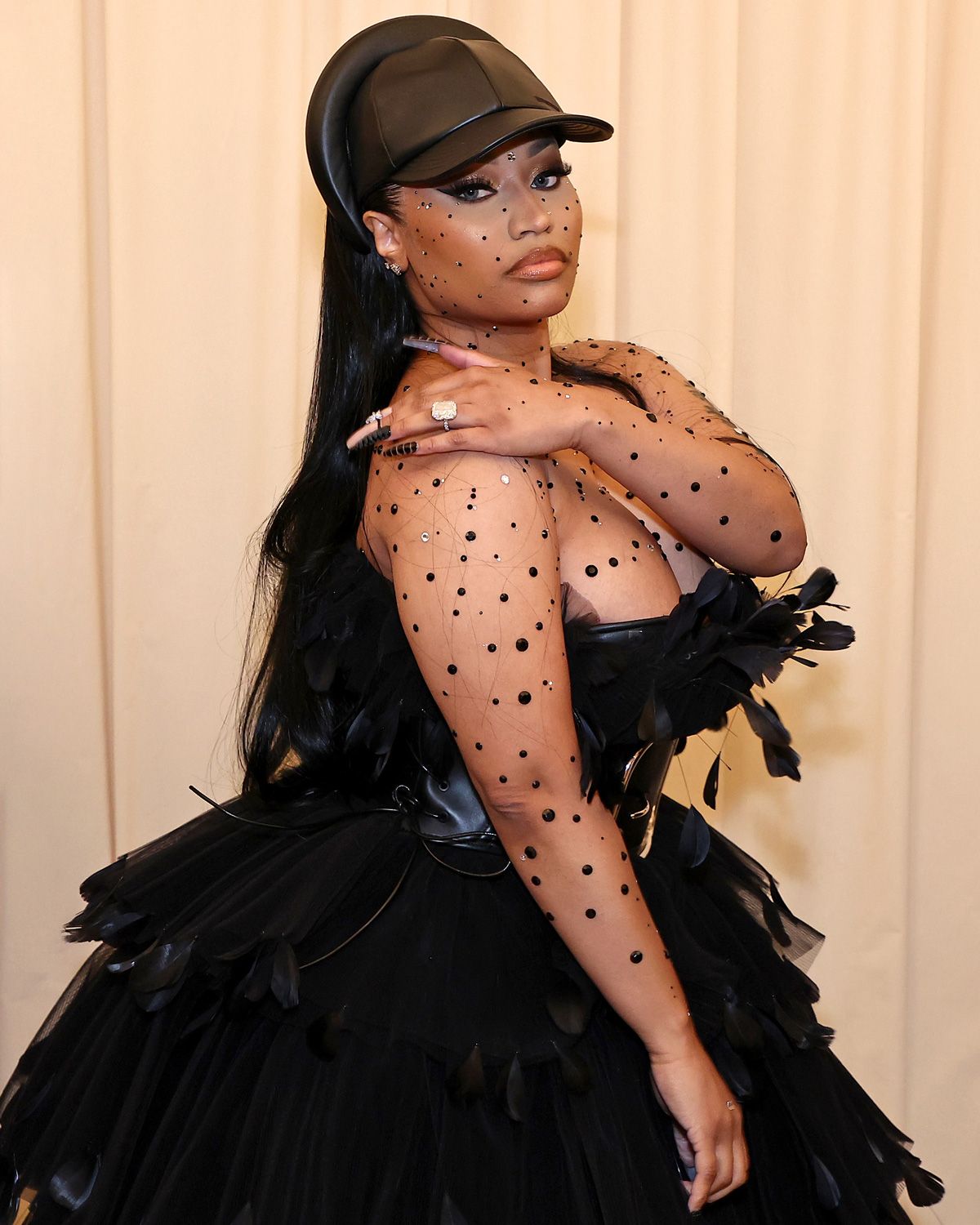 Who is Nicki Minaj?

Nicki Minaj is an American rapper, singer-songwriter, actress, and fashion designer. Minaj was born in Saint James, Trinidad and Tobago, and was raised in Queens, New York, US. She is known for her fast-flowing rap style and extravagant style, including brightly colored make-up, unconventional outfits, and bold hairstyles.

Since signing with Lil Wayne’s record label Young Money, Minaj has delivered four studio albums and more than 100 singles. Even though she gained initial recognition for her mixtapes, she had a big breakthrough thanks to her chart-topping studio album Pink Friday in 2010, with “Your Love” and “Super Bass.” Nicki Minaj’s other biggest hit songs include “Starships,” “Bang Bang,” and “Anaconda.”

WHAT IS NICKI MINAJ'S REAL NAME?

The real name of Nicki Minaj is Onika Tanya Maraj.

How old is Nicki Minaj?

Where does Nicki Minaj live?

WHERE IS NICKI MINAJ FROM?

Nicki Minaj was born in Saint James, Port of Spain, Trinidad and Tobago. Later, at the age of five, Minaj moved to Queens, New York, US. She currently lives in Los Angeles, California, US.

Who is Nicki Minaj signed to?

Nicki Minaj is currently (2022) signed to a record label called Young Money Entertainment, founded by rapper Lil Wayne in 2005 which is distributed by Republic Records.

How many Grammys does Nicki Minaj have?

Even though Nicki Minaj has been nominated for a total of 10 Grammy Awards, she hasn’t yet had any wins, despite reaching billboard charts several times.

WHAT WAS NICKI MINAJ'S FIRST SONG?

Nicki Minaj’s first ever single was “Massive Attack,” but it never actually made it to her album. It was originally intended as the lead song for her debut album Pink Friday (2010) but was later dropped due to poor commercial performance. Her first hit solo single was “Your Love” from the same album, which peaked on the US Billboard Hot 100 at number 14.

How many albums does Nicki Minaj have?

With four studio albums, three mixtapes, and over 100 singles under her belt, Nicki Minaj has got an impressive discography. She is one of the four female rappers, including Megan Thee Stallion, Iggy Azalea, and Cardi B, who has reached the very top of the Billboard Hot 100 since Ms. Lauryn Hill, with solo tracks “Bodak Yellow” and “Up” and three others which were collaborations “I Like It,” “WAP,” and “Girls Like You,” among other best Nicki Minaj songs.

How tall is Nicki Minaj?

What is Nicki Minaj's net worth?

Nicki Minaj’s net worth stands at an estimate of around $100 million.

Uploads her first tracks to her Myspace profile.

A year later, Nicki Minaj released her first mixtape, Playtime Is Over.

Minaj releases her third mixtape, Beam Me Up Scotty.

She is discovered by Lil Wayne and signs with his Young Money Entertainment label.

Minaj appears alongside Gucci Mane and Trina on the remix of “5 Star Bitch” by Yo Gotti.

Minaj releases single “Massive Attack,” originally intended for her debut album but is dropped due to poor commercial success.

First debut single “Your Love” was released, alsong with “Check It Out” and “Right Thru Me.”

Minaj’s debut album Pink Friday is released. It debuts at number-two and sells 375,000 copies in its first week.

She partnered with MAC on a limited edition lipstick “MAC” to promote the record.

Minaj is nominated for three awards at the 2011 Grammy Awards.

Minaj wins the MTV Best Hip-Hop Video at the VMAs for “Super Bass.”

Designer Jeremy Scott signs a deal with Minaj to appear in promotions for the fall/winter adidas Originals campaign.

Minaj becomes the first solo female rapper to perform at the Grammy Awards where she premieres track “Roman Holiday.” The performance proves to be controversial for its exorcism theme.

A one-off fundraising Nicki Minaj-themed Barbie doll is produced and sold for $15,000.

With 44 entries in the Billboard Hot 100, Minaj becomes the most-charted female rapper of all time.

Minaj appears alongside Cameron Diaz in The Other Woman.

A wax figure of Nicki Minaj was unveiled at Madame Tussauds in 2015, and became co-owner of Jay-Z’s music streaming service Tidal.

In 2016, Minaj appeared in the third installment of the Barbershop film series.

A year later, in 2017, Minaj appeared on Jason Derulo’s “Swalla,” and also signed a modeling contract with Wilhelmina Models.

Singles “No Frauds,” “Changed It,” and “Regret In Your Tears” are released simultaneously, resulting in Minaj breaking the record for most Billboard Hot 100 entries for a female artist.

Minaj launches her own Beats 1 show, Queen Radio. During the show, she addresses the rumored feud between her and Cardi B.

The rapper appears on Little Mix’s single “Woman Like Me.”

Nicky collaborated with Fendi on the “Fendi Prints On x Nicki Minaj” capsule.

Minaj releases “Megatron” as a standalone single on June 21, with an accompanying music video.

Shortly after confirming her new album is coming, Nicki Minaj says she is going to retire to focus on starting a family, a few months later dropping a new track, “Fendi.”

During the same year, Minaj got married to new hubby Kenneth Petty, who reportedly dropped a casual $1.1 million on Minaj’s wedding ring.

Minaj collaborates with singer-songwriter Meghan Trainor, featuring on Trainor’s studio album Treat Myself on “Nice to Meet Ya.”

Minaj made an appearance as a guest judge on the TV show RuPaul’s Drag Race.

Later on in the year, she collaborated on a new song, “Move Ya Hips,” and was featured on the track “Expensive” by rapper Ty Dolla Sign.

Nicki Minaj released various mixtapes prior to her first studio album Pink Friday (2010), including Beam Me Up Scotty (2009). She re-released that mixtape in 2021, after which it reached number two on the American Billboard 200 chart.

Track “Seeing Green” from the re-issued mixtape, featuring rappers Drake and Lil Wayne, reached 12th on the US charts.

In September, Nicki Minaj collaborated with British musician Elton John for his new album, The Lockdown Sessions (2021), with the song “Always Love You” with rapper Young Thug.

On February 4, Minaj released a new track, “Do We Have a Problem,” in collaboration with rapper Lil Baby, which peaked at number two on US Billboard 100 charts.

These Are the Rappers With the Most No.1 Hits
CulturesponsoredApril 23, 2020

Marc Jacobs’ New Heaven Collection Is One for the Barbz
CulturesponsoredMarch 3, 2022

Sponsored Story
Nobody Does It Better Than The Classic Crocs Clog

Nicki Minaj’s Court Loss Shows How Artists Can Get Sued for Leaks
CulturesponsoredSeptember 17, 2020

Did Drake Predict That Lil Wayne Would Sell All His Masters?
CulturesponsoredDecember 18, 2020

Let’s Put That Tired “Women in Rap Must Have Beef” BS To Bed Once & for All
CulturesponsoredOctober 14, 2020

Let’s Put That Tired “Women in Rap Must Have Beef” BS To Bed Once & for All
CulturesponsoredOctober 14, 2020
Search Results
Load More
Account