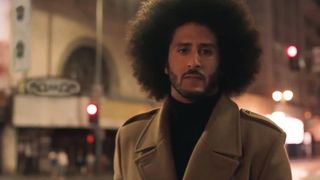 Fresh off the release of Nike’s controversial “Just Do It” ad, starring Colin Kaepernick, the Swoosh now debuts its first commercial with the former San Francisco 49ers quarterback, its new “Just Do It” spokesman, in celebration of the motto’s 30th anniversary.

The two-minute spot, titled “Dream Crazy” depicts an inspirational montage of athletes overcoming adversity to chase their dreams that is sequenced with a narraration by Kaepernick. “What non-believers fail to understand is that calling a dream crazy is not an insult, it’s a compliment,” says Kaepernick. He is also seen juxtaposed against an image of the American flag in the ad, while reiterating the now controversial statement, “Believe in something. Even if it means sacrificing everything.”

With other star athletes like Shaquem Griffin, Serena Williams and LeBron James also featured prominently in the ad, Kaepernick concludes the inspirational clip, saying, “Don’t ask if your dreams are crazy, ask if they’re crazy enough.”

Up next, here’s why Nike’s Colin Kaepernick campaign is equal parts strategic and progressive.

Colin Kaepernick Gave Us a Glimpse of His Rumored Nike AF1 Collab at NFL Workout
SneakerssponsoredNovember 17, 2019

A Year On, Nike’s Kaepernick Stand Paid Off
SneakerssponsoredSeptember 7, 2019