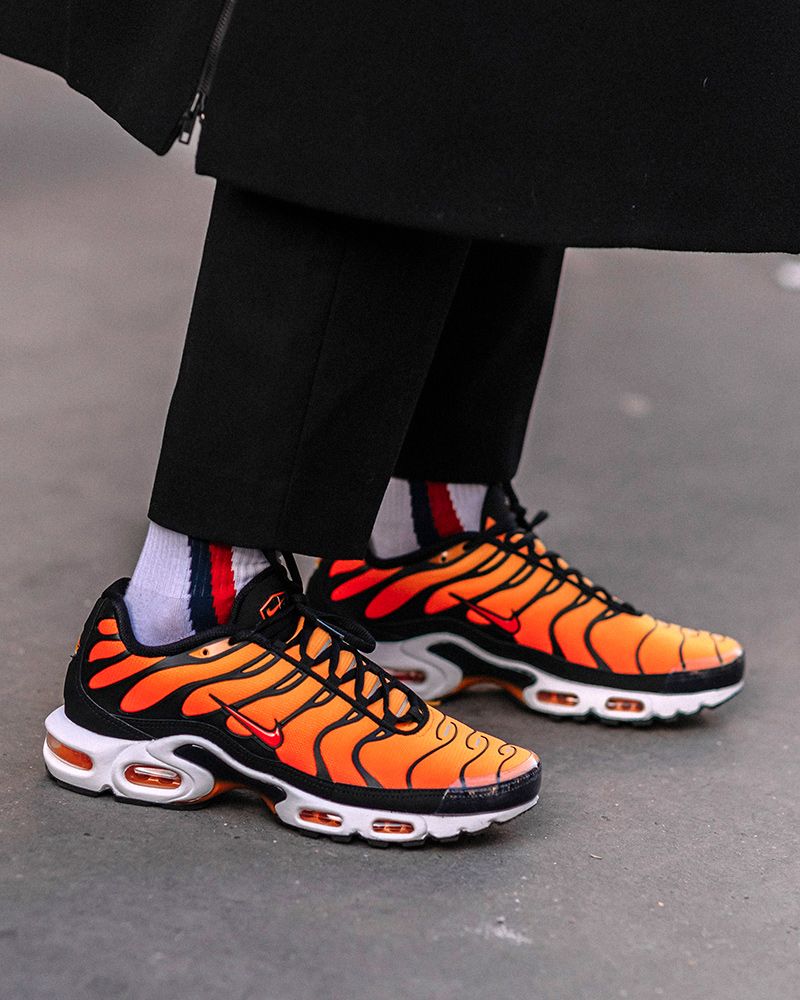 when was Nike founded?

Even though Nike is a publicly traded company, the swoosh logo brand is owned by its original co-founder Phil Knight and his son Travis Knight who own 97% of outstanding shares and the holding companies.

WHERE TO BUY NIKE SHOES?

Nike releases many of its premium and limited shoes through its SNKRS app (iOS, Android) and at Nike.com. The company has over 1000 stand-alone Nike retail stores worldwide and thousands of franchises. In addition, Nike shoes are available at practically every reputable footwear retailer, from major chains such as Foot Locker to specialist sneaker and streetwear boutiques.

WHAT ARE THE BEST NIKE SNEAKERS?

Nike releases many of its premium and limited shoes through its SNKRS app (iOS, Android) and at Nike.com. The company has over 1000 stand-alone Nike retail stores worldwide and thousands of franchises. In addition, Nike shoes are available at practically every reputable footwear retailer, from major chains such as Foot Locker to specialist sneaker and streetwear boutiques.

DO CLASSIC NIKE SHOES EVER GO ON SALE?

Contrary to myth-making, even the fabled Nike Air Jordan 1 ended up on sales racks after Nike reportedly overshot production. Nike’s most popular limited models and collaborations might sell out quickly. Still, older, less popular models and shoes produced in too-large batches will find their way to clearance to make way for new releases.

And as the story of the OG Air Jordan 1 and its unloved 1994 retro shows, just because a shoe ends up on sale doesn’t mean it won’t be considered a grail later. Nike.com always has a notable collection of sneakers on sale.

WHERE DO I GO TO FIND NEW NIKES?

Nike maintains a release launch calendar on its website and Nike SNKRS app. Likewise, the websites of retailers such as Sneakersnstuff, Caliroots, and END. Clothing all have release calendars featuring the most significant upcoming drops.

how much is the Nike logo worth?

By now, the logo is worth billions of dollars – one of the most recognizable brand logos worldwide. Caroline Davidson designed the iconic Nike swoosh in 1971; the graphic design student was paid a mere $35 for her work.

where are Nike shoes made?

Although Nike used to produce in the US, much like other prominent brands, most Nike sneakers are now made in China. There are reportedly over 72 factories in China, which makes up a 15% share of all Nike factories, where around 30 styles of shoes are produced. However, the brand still has some US factories, accounting for about 6% of all factories worldwide.

Nike Dunks tend to run true to the size, not big or not too small. Browsing through Reddit forums and sneaker blogs, the general consensus seems that Nike Dunks generally come in the perfect size. However, they can sometimes feel narrow due to slight differences in feet width and length. As this can still vary, it might be necessary to go half-size up or down.

does Nike own converse?

Where can I buy Nike?

You can buy Nike directly at Nike’s online shop.

Bill Bowerman is born in Portland, Oregon on February 19. He becomes track and field coach at his alma mater, the University of Oregon, in 1948.

Phil Knight is born in Portland, Oregon on February 24. In 1955, he enrolls at the University of Oregon to study journalism, following in his newspaper publisher father’s footsteps.

He runs track under Bowerman and graduates in 1959. After a year in the army, he goes to grad school at Stanford, getting a master’s in business administration in 1962.

After Stanford, he sets off on a round-the-world trip and in Kobe, Japan strikes an agreement to distribute the Tiger-branded running shoes of Onitsuka Company (later ASICS) in the US, introducing them to former coach Bowerman upon his return.

Knight and Bowerman found Blue Ribbon Sports on January 25 to sell Onitsuka’s Tiger shoes in the US. The company is founded with $1,200 in the bank. Bowerman writes to Onitsuka proposing that he submit his own ideas for new running shoes.
Onitsuka and Bowerman develop the TG-24 running shoe, which is renamed the TG-24 Mexico to mark the 1968 Olympics in Mexico City.

It then becomes the TG-24 Aztec, but an adidas lawsuit prompts another change. Finally, it is named the Cortez.

The Blue Ribbon Sports-Onitsuka relationship comes under strain, with Onitsuka reportedly attempting a company takeover and soliciting new US distributors.

Blue Ribbon registers the Nike brand on May 30, taking the name from the Greek goddess of victory. Student Carolyn Davidson designs the brand’s logo, the Swoosh, getting paid $35 for her work.

Nike releases a Swoosh-emblazoned version of the Cortez. Onitsuka cuts its supply of Tiger-branded shoes. Some stores stock both the Tiger Cortez and the Nike Cortez. Romanian tennis player Ilie Nastase becomes the first athlete to sign a Nike endorsement.

Blue Ribbon Sports and Onitsuka sue each other over the rights to the Cortez, among other things. Nike releases the Blazer basketball shoe, named after the Portland Trail Blazers. The brand also signs US running star Steve Prefontaine, who tragically dies in a car wreck two years later. The company comes to dominate track and field in the US, later sponsoring Carl Lewis, Jackie Joyner-Kersee, and Michael Johnson.

In April, Judge James Burns awards damages to Blue Ribbon Sports (settled on appeal in 1975) and rules that only the American company has the right to sell under the trademarked “Cortez” name, although both companies can use the same design. Onitsuka later launches the renamed Corsair. Nike releases the Waffle Trainer, featuring the patented waffle sole conceived a few years earlier when Bowerman reportedly poured rubber into his wife’s waffle maker.

Nike fully releases the Air Tailwind, its first model to feature the Air cushioning tech brought to the company by aerospace engineer Marion Frank Rudy in 1977. The model had a limited Hawaiian release in 1978 after debuting in the Honalulu Marathon. The first Nike apparel comes out, including the Windrunner jacket.

Nike releases the Shark, the first football cleat designed for both turf and grass. The brand’s first football shoe was 1971’s “The Nike,” which could be used for both football and soccer. In December, the company goes public.

Nike signs Michael Jordan. The basketball prodigy had worn Converse at the University of North Carolina and wanted a deal with adidas, but Nike pulls out all the stops, offering a record $2.5 million over five years plus stock options. Jordan starts his debut season at the Chicago Bulls wearing the Air Ship basketball shoe, falling foul of the NBA’s footwear color rules for wearing a red and black model in a preseason game.

Nike releases the Air Jordan 1. The Peter Moore-designed shoe’s “banned” ad campaign is inspired by the NBA’s warning not to break its “uniformity of uniform” rules. There have been dozens of Air Jordan models since, the most important of which include the Air Jordan 2 (1986) and Tinker Hatfield’s Air Jordan 3 (1988), Air Jordan 4 (1989), and Air Jordan 11 (1995). Similar basketball model the Dunk is also released in 1985. Its college team colorways are promoted through the “Be True to Your School” ad campaign. Another basketball sneaker, the Terminator, comes out in Georgetown Hoyas colors.

Tinker Hatfield’s Nike Mag appears in Back to the Future Part II. Nike launches the ACG (All Conditions Gear) line.

Nike signs a five-year licensing deal with the NFL worth $200 million, although it doesn’t produce uniforms for all teams due to individual licensing agreements. After Reebok strikes an exclusive apparel deal worth $250 million from 2001 to 2011, Nike wins the contract back for five years from 2012 in a deal worth a reported $1.1 billion. That deal gets extended twice and will run until 2028. Also in 1995, Nike introduces its Zoom Air cushioning tech and launches the Uptempo line of basketball shoes.

Nike signs golf prodigy Tiger Woods, who goes on to dominate a sport previously seen as for older white men. The company also signs a record 10-year deal to outfit the Brazilian national soccer team, adding young star striker Ronaldo to its roster. This completes a two-year pursuit by Phil Knight and marks a redoubling of Nike’s efforts in the sport. The US women’s and Nigerian men’s national teams, both signed by Nike in 1994, take Olympic soccer gold at the 1996 Olympics in Atlanta.

Nike buys Converse for $305 million. In sports, the brand signs LA Lakers star Kobe Bryant, who had left adidas a year earlier, on a four-year $40 million deal. It also picks up teenage sensations LeBron James and Cristiano Ronaldo. Both sign lifetime Nike deals in 2016 worth a reported $1 billion, joining Michael Jordan, who signs for life in 2015.

Nike releases the Air Yeezy, its debut collaboration with Kanye West. The Air Yeezy 2 follows in 2012 before West jumps ship to adidas in 2013. The Swoosh also collaborates with Jun Takahashi of UNDERCOVER for the first time, leading to the launch of the Japanese designer’s Gyakusou running line in 2010.

Nike releases the Air Foamposite One “Galaxy.” After riots at its launch, the shoe generates astronomical resale prices.

Nike launches NikeLab, a sub-line for its most forward-thinking and innovative collaborations.

As well as Jun Takahashi’s Gyakusou, NikeLab is also home to the relaunched ACG line under ACRONYM designer Errolson Hugh, whose partnership with the brand lasts from 2014 to 2018.

Nike signs an eight-year deal worth a reported $1 billion to outfit the NBA from the 2017-18 season. The brand also collaborates with Chitose Abe’s label sacai for the first time.

Nike partners with OFF-WHITE’s Virgil Abloh on “The Ten,” a collection of classic sneaker models reimagined by the designer. The partnership continues with additional sneakers in 2018 and 2019.

The brand signs Kendrick Lamar away from Reebok, with the rapper dropping a series of Cortez collaborations.

Nike also debuts collaborations with Skepta and A-COLD-WALL*, and celebrates the Air Force 1 with the AF-100 collection designed by Virgil Abloh, Don C, Travis Scott, and others. Scott later continues collaborating with the brand.

Nike launches a new “Just Do It” ad campaign featuring Colin Kaepernick, the NFL quarterback-turned-activist whose football career had essentially been ended after his kneeling protests against racial injustice during the pre-game national anthem. The brand had reportedly come close to dropping Kaepernick in 2017 and the advert became controversial in a politically polarized US.

In October, John Donahoe was appointed as the new CEO of Nike, succeeding Mark Parker in January 2020.

Nike cut ties with Amazon due to so many fake products on the platform and announced a focus on direct-to-consumer business and their own website.

Announced in 2018, the Nike share buyback program started in 2019 upon completion of the previous program.

The Jumpman replaced the swoosh on the NBA’s “Statement” uniforms.

Nike temporarily shuttered stores due to the Covid-19 pandemic and announced plans for further e-commerce development.

Jacquemus and Nike collaborate for the first time, bringing back the Humara model.

Nike announces old and new football star in its iconic World Cup ad ahead of the FIFA 2022 competition, from Ronaldinho to Mbappe.

Once again, Tom Sachs and Nike team up on an all-purpose Nikecraft shoe.

Sponsored Story
10 Basic Pieces That Every Wardrobe Should Have
StylesponsoredDecember 8, 2022

Spider-Man: Across the Spider-Verse Glitches the Air Jordan 1
SneakerssponsoredDecember 5, 2022

Nike Is the Unexpected Star of 2022 Knitwear
StylesponsoredDecember 2, 2022