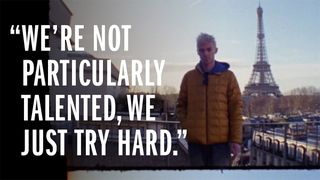 Reese Cooper seemingly came out of nowhere when he caught the fashion world off guard just four years ago with his eponymous label. The 22-year-old Atlanta-born, London-raised designer is often lauded for creating the “heritage brand of the future,” and even became the youngest finalist for the prestigious CFDA/Vogue Fashion Fund Award in 2019.

And now his partnership with StockX, which began early last year as part of the resell platform’s influencer program, has finally come full circle. StockX just dropped a mini-documentary following Cooper’s journey from putting together his first women’s collection for New York Fashion Week to his controversial decision to continue with his runway show in Paris this season despite not making the schedule.

Titled “We’re Not Particularly Talented, We Just Try Hard,” the 30-minute film gives us an intimate look at Cooper’s creative process and what it’s actually like to put on a runway show of such magnitude. “There’s no easy side of this. I’m self-funded and don’t have parents in fashion — if you wanna do this you’re really in it,” he explains early in the documentary. “My initial thoughts going into [New York Fashion Week] was, “What the f**k did I sign up for?”

Of course, this is a StockX partnership after all and as part of the premiere Cooper is dropping his NYFW “team shirt” exclusively on the site. The limited-edition tee features the title of the film printed on the back and is worn by Cooper himself throughout the documentary. For a chance to cop, just place a bid here.

Watch the full documentary and check out more of Reese Cooper’s work.