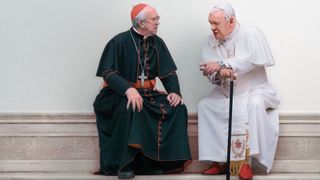 Netflix has released the first trailer for The Two Popes, the upcoming film exploring the real life transition from Pope Benedict to Pope Francis. Anthony Hopkins plays the former, a traditionalist, while Jonathan Pryce portrays the latter, the modernist who would go on to make landmark proclamations for the Catholic Church.

Despite their conflicts, Benedict sought out the Cardinal to become his successor, and the pushes and pulls of their relationship are at the center of the new flick. Directed by City of God‘s Fernando Meirelles, The Two Popes has been accumulating awards in the international festival circuit.

Look for The Two Popes to begin streaming on Netflix December 20.

Anthony Hopkins Finds Himself in a Papal Feud in Netflix’s ‘The Two Popes’
MoviessponsoredAugust 29, 2019