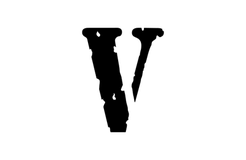 One of the many offshoot projects to brand out of the A$AP MOB empire, VLONE is a street fashion brand headed up by Jabari Shelton, better known as A$AP Bari or Young Lord. The brand is also supported by A$AP Rocky, and CLOT founder Edison Chen. The brand began surfacing on social media in 2013 and quickly gained notoriety after being worn by A$AP members and the likes of Ian Connor. Best known for its distinctive elongated text logo and “V” imprint, the brand mainly produces simple streetwear pieces such as T-shirts, sweats and headwear, but has recently expanded into more elaborate designs and cut-and-sew pieces. Like many other brands in the new wave of streetwear that has occurred over the past few years, VLONE operates predominantly through its online store, dropping collections at short notice with little promotion. Despite this, product rapidly sells out, and is very difficult to get hold of. The brand also occasionally holds pop-up stores across the world in cities such as New York, London and Hong Kong. Toward the end of 2016, VLONE began teasing images of a collaborative pair of Nike Air Force 1s, constructed from premium leather in VLONE’s trademark black-and-orange color palette. The collaboration proved to be one of the most hotly-anticipated sneaker releases of 2017, with models reselling for upwards of $2000 in some places. In June 2017, A$AP Bari made a bold move when he announced that the brand would be exhibiting a full fashion collection at Paris Fashion Week Spring/Summer 2018. The presentation, attended by the likes of Skepta, A$AP Rocky and Virgil Abloh, revealed a comprehensive range comprising tees, shirting, denim, outerwear, accessories and more. Though the decision to host a fashion show in Paris was bold for such a young brand, it appeared to achieve A$AP Bari’s objective of establishing VLONE as a serious fashion label, and the label looks set to expand further over the coming months.