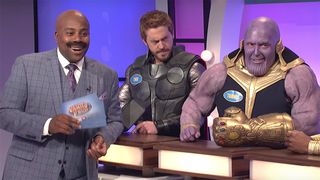 As Avengers: Endgame is out in theaters, and Game of Thrones is in the middle of its eighth and final season on HBO, you’ll be hard-pressed to find two more popular means of entertainment at the moment. Saturday Night Live chose to bring the two wildly popular franchises together in one hilarious sketch over the weekend, further capitalizing on the coinciding hoopla.

With Kenan Thompson portraying host Steve Harvey, your favorite Avengers and Game of Thrones characters face off on a special edition of Family Feud. We see Alex Moffat’s Thor, Beck Bennett’s Thanos, Kate Mckinnon’s Lady Brienne of Tarth, Mickey Day’s Tormund Giantsbane, and Kyle Mooney’s Brandon Stark, among others, failing miserably at the celebrated game show. Towards the end of the segment, however, team Game of Thrones pulls out their surprise ringer as Arya Stark makes an appearance to hopefully save the day.

Press play above to find out what happens when The Avengers meets Game of Thrones on Family Feud.

Bran’s Diss & The Most Hilarious Memes From the Emmys 2019
MoviessponsoredSeptember 23, 2019

Was the ‘Game of Thrones’ Finale Teased in This Season 1 Poster All Along?
MoviessponsoredApril 15, 2020
What To Read Next
Load More
Search Results
Load More