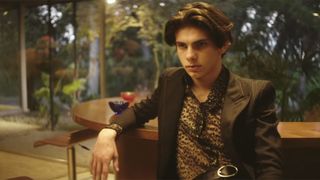 The clip, titled “The Arrangement,” follows previous collaborations with photographer Daido Moriyama and performance artist Vanessa Beecroft, both of whom lent their signature style to the Parisian fashion house. Ellis is no stranger to controversy, and Vaccarello reflects on his choice of collaborators, “They are free, they have sometimes experienced censorship, but they are trying to fight back, without wanting to provoke. Their point of view is not necessarily in agreement with their time and, it has to be said, often politically incorrect.”

Speaking about the project Ellis says, “The lyric kept repeating itself to me as I began shooting this short film for YSL, about jealousy and romantic obsession, the windmills of your mind being the things you project onto a neutral reality when you are trapped within the throes of desire, infatuation can often make the tactile world seem fictional, a fantasy, because it leads us down unexpected paths that don’t conform–that disrupt–our daily reality, and this feeling can be even more intense when you’re young, and so much of the world hasn’t revealed itself to you yet–its starkness, its pragmatism. A utopia is still a possibility, and the purity of love is still an option. And I liked exploring this idea by juxtaposing the elegance of the characters world with the turmoil and dreamy confusion they are experiencing. I also wanted the film to have an LA feel, situated in a place where fantasy and reality often collide within the confines of the entertainment industry. But I was also initially drawing my inspiration from Yves and his second home in Morocco, and giving it a contemporary feel.”