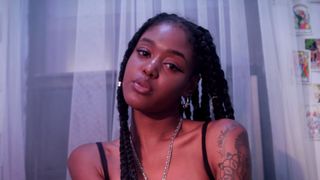 After connecting with French singer/producer Oklou for the track “Xternal Locus” in October, A$AP Mob protegé Chynna is back to deliver the official video for her single “Dough,” which premiered last spring.

Directed by Spike Tarantino with production courtesy of Heaven In Stereo, we see the Philly rapper delivering her hard bars over the head-bobbing beat, as Chynna is lounging at home with the candles burning, along with sequences of the artist rapping outside of an apartment and on the rooftop.

Enjoy the clip above, and for a chance to see Chynna perform live, see underneath her upcoming European tour dates beginning December. Tickets can be purchased here.

In other music news, Leikeli47’s ‘Acyrlic’ is a powerful dedication to the transformative Black woman.

The Weeknd’s New Video For “In Your Eyes” Is Nothing Short of Disturbing
MusicsponsoredMarch 23, 2020

Roddy Ricch Is Unstoppable in His New Video for “The Box”
MusicsponsoredFebruary 29, 2020