For all us city dwellers, we know that getting across town during rush hour is nothing short of a stress-inducing nightmare. Especially if you have a lot to carry. And even more so if you don’t have a solid way of stashing all your gear. U.K.-based accessories brand CONSIGNED gets this better than most and is set to solve this problem with its functional and durable range of bags and accessories. For Fall/Winter 2018, the brand has called upon three young Londoners that face this challenge on a daily basis, namely co-founder of YouTube series PAQ Elias Riadi, streetwear pioneer Ceara Maya, and rapper Che Lingo.

Shot by renowned photographer Alex de Mora and styled by Highsnobiety’s Fashion Director Atip Wananuruks, the #WeAreTheConsigned campaign follows the three young Londoners as they make their way across the British Capital. From vintage stores in the West to an estate in the South, on each of their journeys, they track out notable locations that have inspired their creativity and helped them become who they are today.

As they explore the capital, Riadi, Maya, and Lingo all don CONSIGNED’s FW 2018 collection. The new drop encompasses backpacks, cross-body bags, holdalls, and bumbags, which are designed with functional features such as multiple storage compartments, ergonomic straps, and rubberized handles. A fresh camouflage-inspired print adorns several of the designs and is contrasted with pops of bright orange and bold printed webbing tape.

Check out the collection in the video below, and then keep on reading to learn more about Riadi, Maya, and Lingo, their work and lives in London. 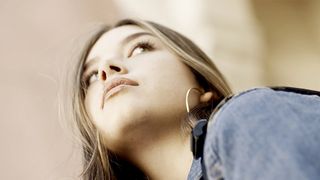 Since debuting his first mixtape Trillingo in 2013, the South London emcee Lingo has been drawing the attention of critics and fans far beyond the borders of his home city. Earlier this year, he followed up 2017’s EP Better Versions with the seven-track album Charisma, both of which he wrote, mixed, directed the videos for, and even released himself. The ambitious rapper has a message to impart and, whether talking about racism, gender rights, or speaking out against the music industry, Lingo is becoming known for his honest and outspoken opinions which he imparts with impressive lyrical dexterity. For the campaign, Lingo guided Mora around the block he grew up in showing him memorable locations such as the route he used to run as a teen. 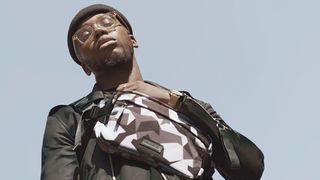 On being his own boss:
Independence is what I want, everybody wants to be able to take control of their career and make decisions for themselves. I don’t shy away from responsibility and pressure—if anything I work better under within those parameters. My label in itself and my whole motto is, “the risk is proof.” You can’t take risks if you don’t have things to lose. In any creative field, nothing is guaranteed unless you put the work in. So it excites me that I now have the freedom to be a full-time artist and to be independent. And to take control of my life.

On the younger generation:
Youth culture of today is instant. It’s very quick and immediate. It feels like everyone is more instant and little bit more reckless and they are happy to be a little bit more ignorant, which is worrying. But at the same time, there has never been a more innovative generation. The adults that are us and the kids that they are having are being cultivated into being free thinkers. When it comes to tech and fashion, there hasn’t been a more innovative generation than this one and the one to come.

“To my five-year-younger self, I would have said, “believe in yourself.” It’s so cliché but just believe in yourself a bit more—you’re saucy, you’ve got to go get it. It’s there, just cultivate it and work at it, and create some habits that keep you working at it and get more addicted to it so you can become even sicker.”

On becoming himself:
I find that my style is something that can sometimes precede my music. Not in the sense that I have the best style, but I know what works for me. I had a lot of problems with my body: when I was 17, I woke up and I thought, I don’t want to be overweight, so I just started running around my block—the same block we just shot at, Fraser court. I kept running and I became fit enough that I could run around the block 10 times as my warm up and then I would go to the park and do pull-ups on the swing set. I was doing that every day and I became comfortable and began to broaden my horizons on what I was wearing.

As one-quarter of PAQ—Streetwear’s favorite YouTubers that have amassed over 300,000 subscribers since 2017—Riadi knows a thing or two about streetwear and fashion. The model-cum-presenter has always been passionate about fashion and is known for his flamboyant ‘fits and fearless style. Earlier this year, PAQ partnered up with Highsnobiety on the Best Dressed YouTuber awards with the mission of finding the steeziest YouTuber. Below, the 21-year-old muses on his style, the success of PAQ, and drops tips on taking the best ‘fit pic. 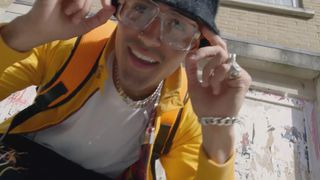 On PAQ:
I think the reason PAQ has had an incredible trajectory of success for over a year is that it brings something that’s completely different. It’s authentic as well. We wanted to create something that we wanted, that wasn’t out there. A lot of people who are trying to get into fashion or are in the fashion industry are quite boujee and very serious. Our approach is to be four young guys having fun with fashion when everyone takes it so seriously. I think the key to why it’s done so well is because we make it so inclusive.

On his style:
I would describe my style is a hybrid. I love vintage, I love high-end, I love streetwear—even though they are merged into one. I think retro-future is basically my style. It’s very flamboyant.

“I always say to people, you wear the clothes, don’t let the clothes wear you. Because if you are wearing something you feel completely uncomfortable with and you’re just wearing it because you’re trying to fit in, then it’s never going to work. Always express yourself through the garments you wear, that are true to you and that you’re happy with. Run the catwalk.”

On today’s younger generation:
I think it’s amazing that something like social media has actually opened up many doors for young people and also allowed young people to connect together. The culture is growing so heavily because everyone can be interconnected. Whether you are from Asia talking to someone from America or get inspired by someone in Russia. It’s crazy, I think it’s amazing that youth culture is so positive. This is the generation that I think is going to change a lot of things. There are no limits, no boundaries.

On taking the perfect ‘fit pic:
I think it really depends. For me, try to make it as obscure as possible. Put your outfit or yourself in a scenario you wouldn’t usually see it in. I know it sounds quite complicated—obviously, it’s great to have clean aesthetics and clean walls—but sometimes the best thing is to contrast your looks with whatever picture your taking. For example, we were shooting up in the mountains and taking a photo in a streetwear outfit up the peak of a mountain, well, you never really see that.

Born and raised in North London, Maya has been championing streetwear since her early teens and has become a role model for streetwear-loving women. Although it hasn’t always been easy for her to make a name for herself in a heavily male-dominated scene, she’s always remained positive and true to herself. In her video, she shows us around her hang out spots of choice in Notting Hill and discusses the challenges of being a woman in streetwear. 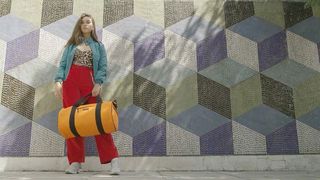 On being a woman in streetwear:

When I first got into streetwear and came to school wearing Palace, the boys would take the piss a little bit. Going into a community that is very male dominated can be intimidating to an extent. But I thought at the time, girls weren’t into streetwear and it was something for me. I was essentially just “dressing like a boy”, but for me, that made me stand out and feel like I was doing something different. The more women get into it, the more it’s going to influence other women to have the confidence to, too.

On being herself:
I think you just have to get yourself out there. People will criticize you for doing something different. But for everyone who criticizes you, there will be more people that are inspired by you.

“Even though I’m from here and have a biased perspective, I do think London is at the forefront of a lot of things. Such good music comes from here, such good fashion, and all the slang words start in London and spread out to everywhere else.”

On Notting Hill and carnival:
Notting Hill is a really cool part of London because it has a mix of cultures and everybody lives there and gets along. It’s like a summary of London. It’s become a place that [my friends and I] always go because there are nice high-end vintage shops and it’s a nice area. It looks nice and it’s got good cafés and restaurants. Also, Carnival is there and everybody comes out from all across London [for it]. No matter who you are, everybody goes to Carnival.

Cop the collection now on consigned.co.uk and via ASOS, and stay updated with the brand’s drops on Instagram.