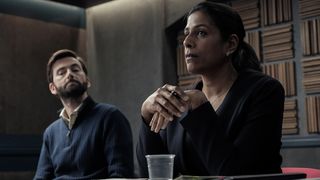 Netflix is slated to premiere a rather intriguing new series, titled Criminal, later this month, as today we receive the latest trailer for the program.

According to the official synopsis, the show is a police procedural that takes place exclusively in interrogation rooms. The drama is said to explore the intense mental conflict between police and suspect.

Criminal is an international program divided into 12 episodes and four parts, featuring actors from the UK, Spain, Germany, and France, including David Tennant, Hayley Atwell, Florence Kasumba, Sebastian Koch, Nina Hoss, and Jérémie Renier, among others. While little is given in the way of specifics surrounding the show, some suggest that the numerous interrogations may all be connected in some way.

You can get a feel for Netflix’s new drama via the trailer above, albeit little dialogue is present. Criminal is scheduled to release on the streaming platform September 20.

Take a Look Inside This ‘Stranger Things’ Escape Room Pop-Up in Seoul
MoviessponsoredJune 19, 2019