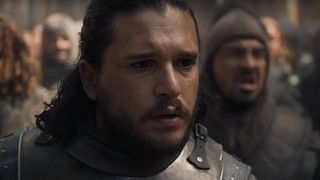 The latest Inside the Episode takes us behind the scenes of last night’s penultimate Game of Thrones installment. The 10-minute-long clip offers some much-needed reasoning into Daenerys’ internal world in the wake of the most recent episode. Showrunners recap the allies she has lost and how that has contributed to her actions at King’s Landing.

In the wake of the destruction wrought in the sixth episode, the showrunners pore over Daenerys’ development and offer insight into her current motivations. They extend this insight to Varys and Tyrion, providing background into their actions over the last couple of episodes.

The special then shifts its lens to Jon Snow and Arya, who begin to emerge as complicated heroes from out of the fog of war.

Showrunner, David Benioff also makes the connection that several years ago, “Jaimie and Bronn are talking about how they wanna, and Jaimie’s talking about dying in the arms of the woman he loves… and this is it.” Watch the clip above to see how the siblings come full circle; Benioff explains, “They came into this world together” adding, “They need to go out together.”

The Best Memes & Reactions From the Penultimate Episode of ‘Game of Thrones’
MoviessponsoredMay 13, 2019

Tension Is Rising in the ‘Game of Thrones’ Trailer for “The Last War”
MoviessponsoredMay 6, 2019

This Video Captures One Second From Every Episode of ‘Game of Thrones’
MoviessponsoredMay 21, 2019

Here’s How Twitter Reacted to That Divisive ‘Game of Thrones’ Series Finale
MoviessponsoredMay 20, 2019

Go Behind the Scenes of the Latest ‘Game of Thrones’ in This 19-Minute Special
MoviessponsoredMay 7, 2019
What To Read Next
Load More
Search Results
Load More