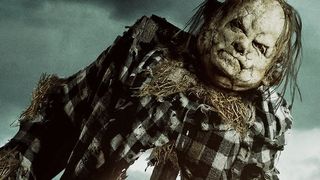 Considering the sheer number of hype-worthy movies teased during last weekend’s Super Bowl, you may have missed the four separate trailers for Guillermo del Toro and André Øvredal’s Scary Stories to Tell in the Dark.

Hailing from CBS Films, the movie will draw from Alvin Schwartz’s iconic anthology series of the same name. The show was built from a series of horror tales for children and it looks like the film won’t deviate too far from the same approach.

From what was revealed, the upcoming movie promises plenty of scares and jump-out-of-your-skin moments. If you’re currently eating, then you may be best advised to give the slightly nauseating “Red Spot” a miss.

Scary Stories will comprise four shorts connecting to the individual trailers: “The Pale Lady,” “Red Spot,” “Jangly Man,” and “Big Toe.” Watch above and below.

Of course, del Toro is no stranger to crafting stunning visuals that pair fantasy and childlike themes alongside horror. For proof, look no further than his 2006 movie Pan’s Labyrinth.

Scary Stories to Tell in the Dark was directed by Øvredal, produced and developed by del Toro, and will hit theaters August 9.