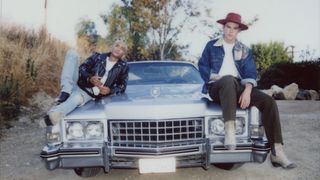 Music rebels Jaden Smith and Harry Hudson have shared the official music video for their 2018 collaboration, “Just Slide.” This time, Hudson briefly trades in his signature cowboy hat for a newsboy cap and dim-lit highways that trigger flashbacks of a faded romance.

In a press release, Hudson previously explained how “the collaboration came about naturally” and consisted of an organic process. Even though the song came out of a breakup, he found a way to send a positive message with the help of some pure R&B magic.

“I wrote this song specifically for my ex knowing she still has feelings for me,” he said. “But it’s really a song to let people know that if they truly feel something about someone just slide through and let them know. Life is too short to sit and wonder ‘What if?’”

Last year, Smith starred alongside Hudson in his short film Can Cowboys Cry. For more from the Los Angeles artist, check out his debut album Yesterday’s Tomorrow Night and revisit our premiere of his “Whenimma” video.

Is Everyone Finally Getting Tired of Sneakers?
SneakerssponsoredApril 7, 2020

Is Menswear Ready for a Crop Top Revival?
StylesponsoredMay 13, 2019