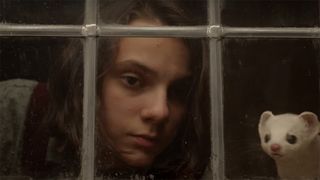 With Game of Thrones coming to an end, HBO is hoping to fill the void with a new fantasy series titled His Dark Materials, based on Philip Pullman’s award-winning trilogy of the same name. According to the network, the show is “coming soon,” and ahead of the premiere we receive a first look at what to expect from the program.

In every child’s nightmare, there’s an element of truth.

The inaugural season of His Dark Materials centers around Lyra, a young woman from another world who is searching for her kidnapped friend. Things are even worse than Lyra could ever have imagined, however, as during her search she stumbles upon a sinister organization responsible for the disappearance of children. Accompanied by her newfound friend Will, the two journey through multiple worlds encountering miraculous beings and uncovering evil secrets. Little do they know that the fate of the living and the dead are in their hands.

Logan’s Dafne Keen stars as Lyra in His Dark Materials alongside James McAvoy, Ruth Wilson, and Lin-Manuel Miranda, while Jack Thorne of Harry Potter and the Cursed Child is writing the show.