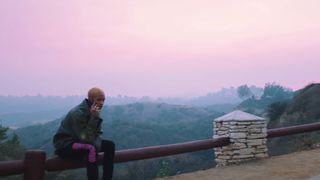 Jaden Smith recently released the visual accompaniment to “Plastic”, hot off the back of his latest project, The Sunset Tapes: A Cool Tape Story, which dropped last week. The video is a big flex, and features Smith wilding out in front of his Tesla Model X in pretty much every shot.

Heavy on autotune and drenched in LA sunsets, the video for “Plastic” is reminiscent of his debut album, SYRE, despite the intro text stipulating, “This is not part of the SYRE timeline.” It also closes with the cryptic forewarning; “ERYS is coming.” Interestingly, the 11-song long Sunset Tapes is conspicuously absent of guest appearances.

Forever the wallflower, Smith took to Instagram to dedicate the album, writing, “To the Females in my life, from the pretty girl crossing the street that I never got a chance to talk to or get out of my head, to the girls that I see in my favorite movies that are way out of my league and unaware of my existence.”

What do you think of Jaden Smith’s latest video? Let us know in the comments below.

Sponsored Story
What You Need to Know About both, the Parisian Footwear Brand Favored by Jaden Smith
SneakerssponsoredDecember 2, 2019