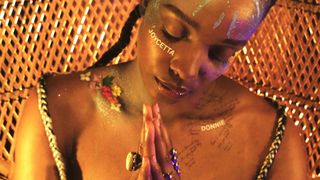 Chicago-based soul singer, songwriter and poet Jamila Woods has released a new single titled “Giovanni,” along with an accompanying short film/music video that she co-directed with Vincent Martell, which features her family.

In a statement, Jamila Woods said, “‘Giovanni’ is a song about owning and celebrating all the parts of myself. It’s about legacy and lineage, and how the love and strength of the people who made me makes me feel invincible.” Additionally, the track was inspired by poet and activist Nikki Giovanni and references her ’70s poem “Ego Tripping,” which she revealed in an interview with The Poetry Foundation.

Enjoy the nine-minute clip above, as it follows her 2016 HEAVN album, which featured standout tracks like “LSD” with Chance The Rapper. For more on Jamila Woods, she will be doing a special show as part of Red Bull Music Festival Chicago on November 30, marking her last performance of HEAVN.

In other new music, Swae Lee teases “Sunflower” with Post Malone from the new Spider-Man movie.