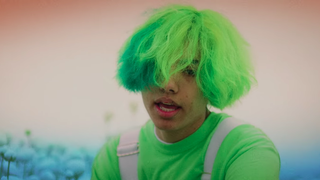 Billie Eilish was able to parlay her childhood obsession with Justin Bieber into an official collaboration, so can you blame this up-and-coming rapper for shooting his shot? Jumex has released the music video for “Billie Eilish,” the final track off of his debut EP, LONER. Even if it fails to grab Eilish’s attention, it’s certainly grabbed ours .

Jumex upped the saturation in this stunning visual as he mulls about in a field of flowers and shares his adoration for the song’s namesake. The video even features on Eilish-lookalike. Her face is never shown, but the signature wardrobe alone is enough to tip you off.

Watch the “Billie Eilish” video above.

Billie Eilish Directs Herself in the Music Video for “xanny”
MusicsponsoredDecember 6, 2019

Billie Eilish Will Make Her Next Studio Album This Year
MusicsponsoredJanuary 21, 2020