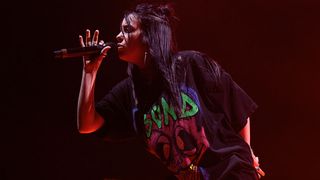 Billie Eilish is currently having a full circle moment now that she’s crossed off a collaboration with Justin Bieber from her list. The pop stars aligned on a remix of “bad guy,” the standout single from her debut album, WHEN WE ALL FALL ASLEEP, WHERE DO WE GO?.

Based on the accompanying artwork, it’s obvious that Eilish has always been a huge fan of Bieber—she previously told Entertainment Tonight that he’s been her idol since she was 12-years-old. Back in October, they met for the first time at Coachella while dancing in the pit during Ariana Grande‘s performance. After their encounter, Bieber tweeted that he was “proud” of her and as fate would have it, that wholesome interaction ultimately lead to this collaboration.

Billie Eilish finally meeting Justin Bieber, it's a yes from me pic.twitter.com/AFCdFW3qKA

In the past, Eilish has also teamed up with Vince Staples and Khalid. Fingers crossed that a song with Tyler, the Creator is in the cards as well sometime soon. Stream the upgraded version of “bad guy” above and revisit our review of em>WHEN WE ALL FALL ASLEEP, WHERE DO WE GO?.

Everything We Know About Justin Bieber’s New Album ‘Changes’
MusicsponsoredJanuary 28, 2020