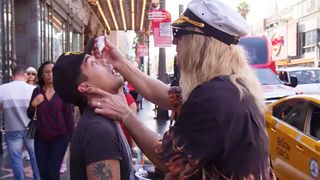 Matthew McConaughey and Snoop Dogg appeared on Jimmy Kimmel Live this week to promote their new movie, Harmony Korine’s Spring Breakers follow-up The Beach Bum, and set out on a mission to troll passersby on Hollywood Boulevard.

Dressing up as his character in the film, stoner poet Moondog, McConaughey took to the street to offer people a range of “cannabis-infused” goods, including mustard, ketchup, eyedrops, bubble-blowers, and deodorant. The catch, of course, was that the items didn’t actually have THC in them at all. Not that it stopped people claiming to feel high.

One participant in the video above claims to feel tingles spreading across her body, one says her legs are gummy bears, and another likes the effect so much he asks for Moondog’s business card. Watch the trolling in action up top.