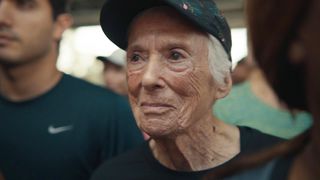 Nike has released a new short film in celebration of the recent Chicago Marathon. A part of the company’s Just Do It collection, Late Bloomer reaffirms that there is no limit to the human determination in sport, not ability, experience, gender, nor age.

Nike’s latest Just Do It picture tells the story of native New Yorker, Marjorie, an 81-year-old who decided to run her first marathon a few years after the death of her husband. Marjorie trained seven months for the event in order to take on New York City’s most prestigious race for her first 26.2 miles.

“I believe that if you can go halfway, and still be running and on your feet, you’ll always finish the other half,” says Marjorie. “If you start something, something that you really want to do, you’ll find a way to complete it.”

In other Swoosh news, Phil Knight is donating $1 billion in Nike shares to charity.

Slide Into the New Year in These Air Max 90 Slides
SneakerssponsoredDecember 24, 2019

A Gold Off-White™ x Nike Air Force 1 Is Rumored for Next Year
SneakerssponsoredMay 6, 2020