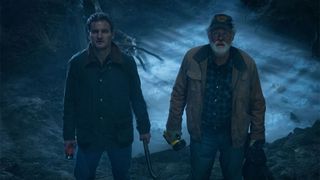 Following our first look in October, Paramount returns with the second trailer for its much-anticipated horror film, Pet Sematary. The movie, starring Jason Clarke, is based on Stephen King‘s acclaimed 1983 novel of the same name.

They don't come back the same. Based on @StephenKing’s terrifying novel, watch the official trailer for @PetSemataryMov. In theatres April 5. #PetSematary pic.twitter.com/4VLbC2fbGd

Pet Sematary tells the story of Louis Creed and his wife Rachel, who have made the move to a rural area with their two children, Gage and Ellie. While settling in, the family is made aware of an eerie pet sematary located near their house. When their cat dies, Louis decides to bury the animal in the sematary, but it mysteriously comes back to life, leaving the Creeds in awe of the burial ground.

Things take a considerably more ominous turn when the Creeds’ eight-year-old daughter is hit by a truck and dies. The experience with the cat leaves Louis wondering if the sematary can bring his little girl back as well. In short, she does return from the dead, but she is certainly not the same.

Pet Sematary is due out in theaters stateside on April 5.

Sometimes dead is better. Check out the official poster for #PetSematary. In theatres April 5. pic.twitter.com/K8UiftIwZp