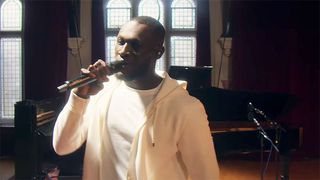 “Crown” serves as Stormzy’s second single drop of this year, following “Vossi Bop,” which landed back in April and made its way immediately onto our round-up of the best rap tracks of 2019 so far. Stormzy also released accompanying visuals and it saw him cruising through his home turf, London, alongside Idris Elba.