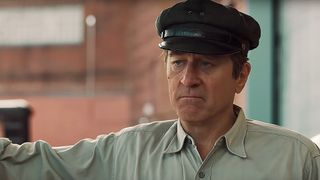 The final trailer for Martin Scorsese‘s The Irishman is here. Thanks to some impressive CGI digitally de-ageing technology, we follow DeNiro as hitman Frank Sheeran in his lifelong entanglement into a life of organized crime.

Be warned, the trailer gives away a number of significant plot points, and even includes a couple of point-blank assassinations.

The trailer opens with Sheeran attending a funeral, where he is interviewed by two agents who tell him, “They’re all gone, it’s time to say what happened.”

They’re referring to one of the greatest unsolved mysteries in American history, the disappearance of legendary union boss Jimmy Hoffa. The two and a half minute trailer spans decades the “the Irishman’s” naviagates the competing interests of union chief Jimmy Hoffa (Al Pacino) and mob boss Russell Bufalino (Joe Pesci).

The Irishman lands on Netflix November 27.

Your Guide to Everything Coming & Leaving Netflix in November 2019
MoviessponsoredOctober 22, 2019