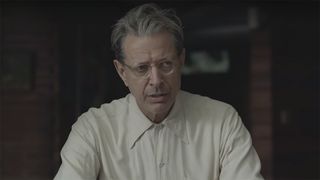 Jeff Goldblum has been tapped to star in Rick Alverson’s latest feature film, The Mountain, which premiered at last year’s Venice International Film Festival. After acquiring the rights to the picture, Kino Lorber shares the official trailer for the intriguing drama.

Loosely based on American neurologist Walter Freeman, Goldblum portrays Dr. Wallace Fiennes, an unconventional neurosurgeon in 1950s America in The Mountain. As he sets out on tour to perform his increasingly controversial lobotomy procedure on patients at various institutions across the country, Fiennes hires a family acquaintance named Andy (played by Tye Sheridan) to accompany him and help by taking photographs of the patients. The more he witnesses Fiennes’ career and life spiral out of control, Andy finds himself identifying with the individuals in the asylums.

Hannah Gross, Denis Lavant, and Udo Kier star alongside Goldblum and Sheridan in The Mountain, which opens in New York and Los Angeles on July 26.

‘I Shouldn’t Be Telling You This,’ But Jeff Goldblum Just Announced a New Album
MusicsponsoredSeptember 14, 2019