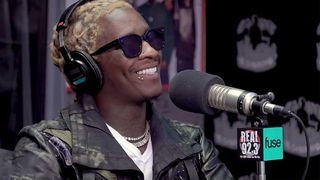 On the heels of releasing his debut album So Much Fun, Young Thug made an appearance on Los Angeles’ Real 92.3 for an interview with Big Boy. In the interview, a soft-spoken Thug talked about his hit album, his Grammy wins, Nipsey Hussle and much more. And in a candid moment, the rapper confirmed a major project dropping soon: a joint album with Juice WRLD.

Asked about the rumor that he and Juice are gearing up for a collaborative project, Thugger simply answered  “Yes,” with a coy smile, revealing that the joint album could be dropping “probably like in three months.”

In addition to this Juice WRLD collaboration, Young Thug recently revealed he would be dropping another solo album titled Punk later this year.