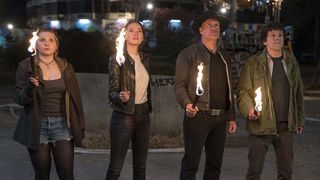 10 years later, the sequel to Zombieland is finally approaching. The first Zombieland: Double Tap trailer brings the gang back together for more fun in the zombie apocalypse. Woody Harrelson, Emma Stone, Jesse Eisenberg, and Abigail Breslin all return, with the last actress all grown up.

Instead of Bill Murray’s house, the group takes over the White House before Breslin’s character disappears and they must search for her. The star-studded cast has been beefed up even further with the addition of Rosario Dawson and Luke Wilson. Dan Aykroyd will play himself, bringing another Ghostbusters star cameo.