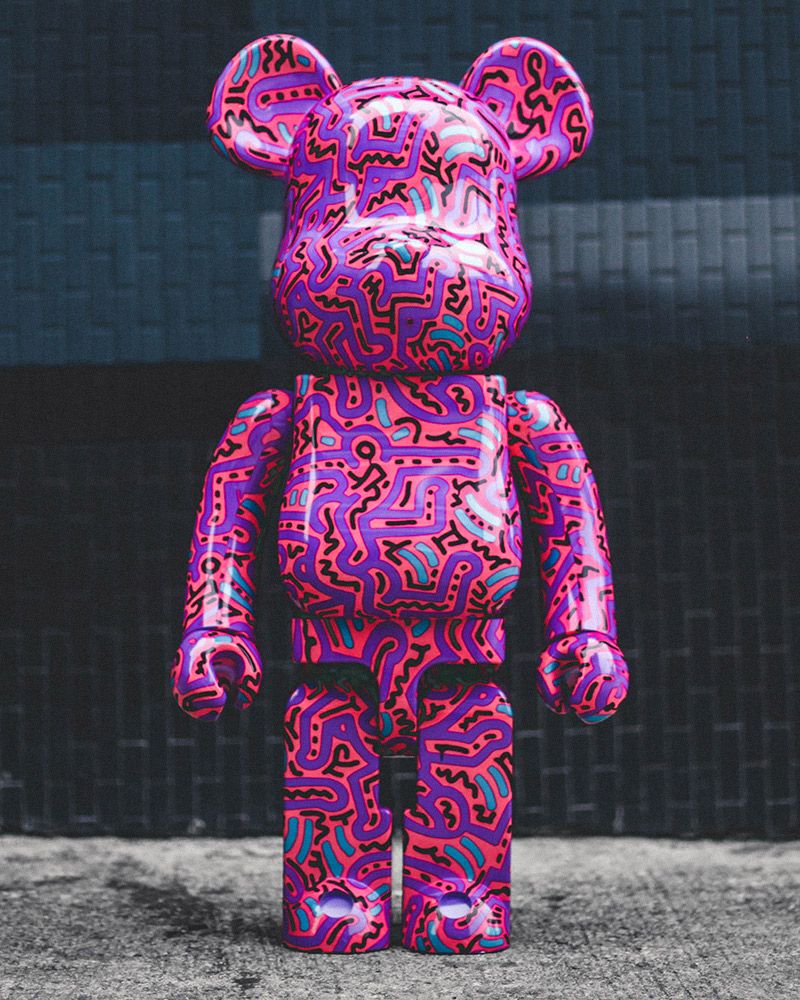 The first BE@RBRICK was birthed by MediCom Toy in Japan in 2001, and no one could have anticipated the subsequent impact it would have on popular culture. The bear-like figure has attracted an impressive array of star-studded collabs, which bridges streetwear, fashion and art in a colourful flurry of desirable collectibles, and it has moved into art galleries as well as the homes of A-list celebrities. (Pharrell Williams and BAPE’s Nigo being just two stalwart fans.)

Show
What is Bearbrick?

The figures are sold in series with two drops a year, with the series in turn consisting of four types (basic, standard, artist and secret.) The standard category can be further sub-divided into different recurring themes, and each BE@RBRICK series and theme also has its own level of rarity. Adding to this the fact that the standard figures are sold in blind boxes, collecting a whole set becomes really tricky, which is part of the allure. Don’t mistake it for a toy, though.

Show
What is the most expensive Bearbrick?

The cult-declared character belongs to one of the most recognized on the planet and has moved into the art sphere much thanks to collaborations with the likes of KAWS, Warhol and Haring, with the rarer releases hammering home thousands of dollars on the re-sell market. The most expensive one being the ‘Qiu Tu’ 1000% Bearbrick (2008), a one-off design created by Chinese contemporary artist Yue Minjun, which sold for a staggering $157,000 at auction.

The first BE@RBRICK is released as a gift to visitors of the World Character Convention 12 in Tokyo.

Acclaimed graphic artist Brian Donnely, AKA KAWS, is behind the KAWS “Chompers” 1000% BE@RBRICK , complete with the “X”-ed out eyes, in conjunction with the Japanese music festival a-nation. It is the first of many collabs to come.

The Coco Chanel 1000% BE@RBRICK is released. It is designed by Karl Lagerfeld and dressed in Chanel’s signature tweed suit and pearls. Only around 1,000 pieces are made.

The one of a kind Yue Minjun ‘Qiu Tu’ 1000% BE@RBRICK sees the light of day, the most expensive Bearbrick to date. This year CLOT and Levi’s teams up with Medicom on two BE@RBRICKs – one strawberry and one watermelon.

As a part of colette’s ‘White Crystal Christmas’ the Swarovski x colette BE@RBRICK is a fact, and the bear is covered in Swarovski drip.

Having collaborated with Stussy on several occasions throughout the years, they join forces again to mark Stussy’s 35th anniversary.

Billionaire Boys Club, KITH and Dickies collaborations appear, but the most notable one is perhaps the collab in memory of late Jean-Michel Basquiat reproducing his artwork.

The Evisu x BE@RBRICK collaboration drops, along with an honorary Muhammed Ali BE@RBRICK.

Stadium Goods Just Kicked Off Its 15% Off Everything Flash Sale
SelectssponsoredDecember 13, 2019

The Highsnobiety Holiday Gift Guide
What to Buy the Person Who Has Everything
SelectssponsoredDecember 5, 2019

These Colorful Be@rbricks Are Dropping at the Hello Miami Art Basel Pop-Up
AccessoriessponsoredNovember 27, 2019

This Ultra-Limited All-White $1,000 Be@rbrick Is Dropping This Weekend
DesignsponsoredApril 17, 2019

15 Drops
The 15 Best Products to Drop This Week & Where to Buy Them
DesignsponsoredFebruary 24, 2019
Load More
Search Results
Load More