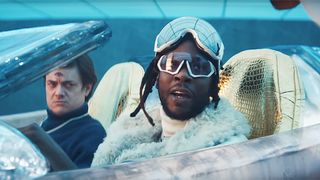 If you thought 2 Chainz spent hours collating paper receipts for the ice-coated cars, seafood platters, massive Oakley ski-glasses, and the various other outlandish elements in his music videos, think again. Or at least, that’s what he’s asking you to believe in a new Super Bowl Commercial for expense-app Expensify, co-starring Adam Scott.

The advert recreates a typically decadent rap video. 2 Chainz is the starring artist and Scott appears as a waistcoat-wearing killjoy from the finance department who tells the artist he must paper-log all video expenses in order to be reimbursed.

“No, I have Expensify for that,” 2 Chainz replies. Watch it all go down above.

From the Tear-Jerking to the Hysterical: Watch the Best 2020 Super Bowl Commercials
LifestylesponsoredJanuary 31, 2020

People Are Obsessed with the Google and #BabyNut Commercials
LifestylesponsoredFebruary 3, 2020

Everything You Need for Your Super Bowl Home Screening
SelectssponsoredJanuary 30, 2020