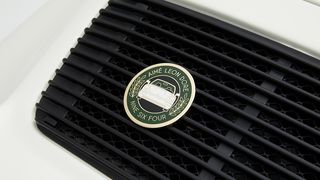 Aimé Leon Dore gave a sneak peek at its unprecedented collaboration with Porsche late last year, and now the label gives the world a look at whole shebang. In a video released today, Aimé Leon Dore shows the restored vehicle in its entirety, revealing an all-white exterior with a fully customized interior.

The Harrison Boyce-directed spot has all the gravitas of a high-end car commercial, and it’s clear that they really wanted to push the car to its limits on the screen. It isn’t the first time that ALD founder Teddy Santis and the BMXer-turned-lensman have linked up either, when Boyce isn’t working with Nigel Sylvester on his GO series, he’s working on projects like last year’s Aimé Leon Dore x New Balance campaign.

ALD plans to have the car on display in NYC during fashion week next week, and even sent out a few invites featuring the Schott leather driving gloves in the video, as well as their own reinterpretation of the Porsche 964 instruction manual, a piece of ephemera super important to car collectors.

Boyce and Santis share a passion for cars—especially Porsches—and first bonded over their mutual appreciation of the German roadsters before actually working together. We caught up with Boyce between shoots to learn a little more about his approach to high-octane filmmaking, what makes this project special, and the lengths Santis went through while designing this car to really make a vehicle that appeals to both sneakerheads and elite automobile enthusiasts like Jerry Seinfeld.

How did you meet Teddy?
Harrison Boyce: I knew Teddy through Nigel Sylvester. I do all the GO videos with Nigel, and we’ve been really good friends for years. Teddy knew I was into Porsches and we would always hang out and talk when we saw each other.

What was the approach you wanted to take with the Porsche project?
HB: I wanted to really take it to that next level and bring my knowledge and the expertise I have with cars and shooting them to a project like this. I drive all the time; I have my own Porsche and really understand the feeling and what I enjoy out of driving, what makes driving special, and how to bring that to the screen.

What’s the working dynamic like between you and Teddy?
HB: He’s super involved and I think that’s why we kind of hit it off so well. I’m not a protective person when it comes to my work, I want to learn every day as much as possible. So when I’m on set shooting, I’m not the type of person that shuts everybody off and just pretends to know everything.

I think that’s what makes his brand so special—he touches every single thing to a crazy degree and he cares about every single detail. I know he’s built a successful brand around the visuals that he’s created. That’s what drew me to it as a consumer, there was a shoot that he did in a loft with the naked model on a bed with a vintage basketball, a pile of books, and stuff like that. Nobody did shit like that and it really piqued my interest.

I heard you guys had to drive from New York to Aspen to get the car there.
HB: We had to get the car out to Colorado, and while there’s shipping companies that transport cars all the time, there’s no real guarantee. I think our mechanic, Greg, overheard our conversation and he was like: “Well, I’ll drive it out there.” He just volunteered, rented a truck, and just drove from Queens there. I think he slept a couple of hours each night in the truck—and he’s a six-foot-six dude.

Were there other hiccups you faced when the car finally arrived?
HB: It was a very stressful morning. We didn’t get the car running until 11, and then on the first set up that we’re shooting, there was a little snowbank on the side and my friend Robbie—who we brought out to drive the car—thought it’d be fun to kick the bumper into the snowbank to get a little snow kick up, but didn’t realize it was pretty much an ice bank.

We ended up scratching the whole side of the bumper up on our first shot. So we ended up just taping it and embracing it. You can see the smashed bumper in the edit and the photos, but it just adds to the story.

How does it feel to see it all coming together? Does it feel like you’ve closed a circle?
HB: It’s pretty fucking crazy that this project exists. Teddy referenced these classic Porsches ever since his brand has started—always posting photos of old 911s and stuff. He’s been into Porsches before everybody got into Porsches, same with myself. And I’m sure there’s stuff that you were into before everybody else did, but you still love that thing even though it’s become kind of trendy.

The fact is that he’s loved these cars since day one, and he understood that he needed to do something above and beyond. All the people that love his brand are going to fuck with it, but also so are the very high-level Porsche guys. Jerry Seinfeld would look at this car, appreciate it, and understand that Teddy gets it.

Car guys and sneaker guys are both nerds about performance, details, and aerodynamics, but expressed differently. As someone who’s more familiar with sneakers than cars, what are the bells and whistles in this Porsche that car fans would go nuts for?
HB: The restoration that he did on the exterior and the engine really shows how much he cared about the project. He didn’t need to go through the whole engine and spend the time doing all this mechanical stuff, but he really wanted to do it right. That’s really cool from a car standpoint— but the interior is going to blow everybody away from a sneakerhead to a Jerry Seinfeld.

He really went full bore with the materials he brought to the car, the custom steering wheel, and the mixture of textures, but did it in such a tasteful way that didn’t blow his load on over-branding or going too crazy. Being able to create something that appeals to both sides of the spectrum is pretty incredible because I think most of the car stuff out there is not really geared towards his audience.

What’s your aim in creating such a captivating video like this?
HB: One thing that I always try to do with all my car stuff is, encourage people to drive their cars. I know a lot of people like to whip it up, go fast on the freeway real quick but I think with this we really wanted to encourage somebody to put their car to work and go on an adventure and drive it hard.

With Tennis Style Everywhere, These Are the Summer’s Best Polo Shirts
StylesponsoredAugust 7, 2020