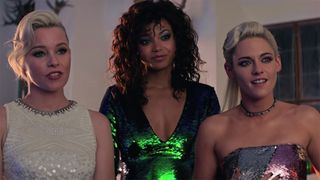 As we are now almost a month away from the release of Elizabeth Banks’ Charlie’s Angels reboot, Sony Pictures shares the second trailer for the anticipated action comedy. The two-plus-minute clip showcases Kristen Stewart, Naomi Scott, and Ella Balinska kicking ass, while also taking some time to do a bit of day drinking.

Stewart, Scott, and Balinska adhere to the direction of the mysterious Charles Townsend in 2019’s Charlie’s Angels, as his security and investigative agency has gone international. Now, the smartest and bravest women around the world are joining forces to become teams of Angels guided by multiple Bosleys.

Charles Manson Makes His First Appearance in New ‘Once Upon a Time in Hollywood’ Trailer
MoviessponsoredMay 21, 2019
What To Read Next
Load More
Search Results
Load More