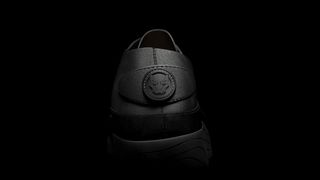 To celebrate the release of what critics are already calling one of the greatest superhero films ever made, Clarks Originals and Black Panther come together for an all-black iteration of the footwear brand’s futuristic Trigenic Evo shoe—the Tri Evo Panther.

The film hasn’t even been released yet and its hype is reaching peak levels. The red carpet looks at its Hollywood premiere earlier this week stunned and shook the movie and fashion world up in one, while we’re pretty sure the Kendrick Lamar-crafted soundtrack is gonna be on end of year best album lists for sure.

The film, centering on T’Challa, king and defender of the world’s richest and most technologically advanced nation, Wakanda, is adorned in a matte-black vibranium suite which matches up perfectly with the technologically advanced materials at use in Clarks Originals’ matte-black iteration of the Trigenic Evo. The collaborative spirit of the film—as epitomized through Kendrick Lamar’s forthcoming soundtrack featuring SZA, Future, The Weeknd, Ab-soul, Anderson.Paak, Khalid, Swae Lee, and Travis Scott—is reimagined through the Black Panther team’s noticeable involvement in the collaborative design.

The Tri Evo Panther incorporates the original’s distinctive three-part outsole and asymmetric last design on top of the sturdy Vibram footbed, with the collab design featuring the matte-black leather and Black Panther logo on the heel counter and shoe lace tag.

The US Gov. Listed Wakanda as a Free-Trade Partner & Twitter is Face-Palming
LifesponsoredDecember 19, 2019
Follow
Highsnobiety Sneakers
What To Read Next
Load More
Search Results
Load More