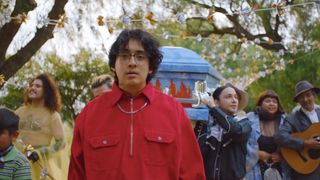 Cuco has released a music video for his latest single, “Hydrocodone. The scenic visual was directed by Jazmín García and filmed in Mexico City where Cuco’s family is from and begins with the singer-songwriter lying on a bed in a full-body cast. Later on, he leads a joyful funeral procession bursting with colorful outfits. In addition to all of the cultural references, a photo of congresswoman Alexandria Ocasio-Cortez also comes into play.

“‘Hydrocodone’ is a music video dedicated to the memory of our past and future selves,” García said in a press release. “It’s an abstract journey through a young man’s memories before and after a big accident. I’m constantly thinking about death and the way we honor it, so I wanted to depict a funeral scene where people are celebrating the passing of a different version of ourselves. Cuco is celebrating and leading this funeral procession because he is more alive than ever.”

Last year, Cuco was involved in a serious car accident that caused him to cancel his remaining tour dates. Since then, he has recovered and will be expected back on the road this summer. Scroll down to peep all the dates and watch the full video above.

Hey guys! I’m excited to be going on the road for this North America Tour. There’s a presale code thing @ loverisaday.com. starts this Wednesday @ 10am local. can’t wait to see uuuu

Cuco Is Not About the Uber Lifestyle in “Bossa No Sé”
MusicsponsoredJune 13, 2019