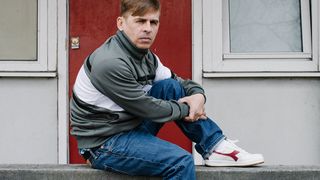 Casual style has enjoyed a bit of a renaissance over the last few years. But the casual aesthetic developed out of a genuine underground scene of late ’70s Britain and represented far more than the recent efforts by a few recent brands. The casual subculture was one of the original street subcultures.

Emerging on football terraces in the late ’70s (hence its occasional ‘terracewear‘ label), everything about it was linked to style and grounded in the culture of British football. But while it was rooted in the community of fans around English and Scottish clubs, its aesthetic was Italian-made.

Many Italian brands came to the forefront of the scene—their sneakers (or trainers if you’re British) on the feet of fans and their tracksuit jackets becoming a backbone of the casual uniform. The appeal of the apparel lay in its price tag and its inherent style. However one brand, at that point unknown to Brits, developed a reputation within the casual scene that helped it become the ultimate status symbol, a discerning marker of your taste, and an underground favorite in a scene that was already well and truly a part of underground British culture to begin with.

That brand was Diadora. Found in limited supply even in its native Italy, the brand had an almost unrivalled prestige and marked its wearer out within a culture that defined itself by the pride in its appearance. Our latest film, produced in close collaboration with Diadora as well as original members of the UK’s casual scene from then and now, dives into the story of how this quintessential Italian label became an underground icon—a position that it still holds today.

The legend goes that fans of British football teams traveled Europe in the late ’70s to watch their clubs battle it out. While on the road, fans discovered continental style and, in particular, labels like Diadora, bringing these brands and their looks back home with them when the final whistle was blown.

In 1977, Liverpool won their first European Cup. The final was held in Rome with 26,000 Liverpool fans flooding the streets (and stores) of the Eternal City to watch the final against Germany’s Borussia Mönchengladbach. This was only the second time the cup was won by an English side. However, it started a run of six consecutive wins for English clubs and marked a distinctive phase in the evolution of British menswear and style as fans from across the UK travelled across (and soaked up the style of) continental Europe.

A look was born from the continental stores and not from what was on the stalls of late ’70s Britain. It was a look defined by plush tracksuits, of sleek colorful knitwear, of quality jeans, of sharp overcoats and collared jackets, all tied together by sleek Italian training shoes.

Of course, today these looks still live on in shoes like the white Aberdeen trainer with its distinctive Diadora lateral swipe (seen above), the distinctive navy blue Birmingham (below), or the Squash Elite with its gorgeous all-gum sole and white and blue upper (see final gallery, below). Contemporary styles by Diadora, like its ’80s zip-up training jacket, or Diadora’s Dribble and Kick T-shirts hark back to that style and are releasing in the coming weeks as a nod to the era.

However, this period was also the beginning of the first real sport stars. Diadora became a titan in the ’70s and the ’80s because it dominated in sports like tennis and soccer through athletes like Björn Borg on the court and Roberto Baggio on the pitch. Their style of play in the game and their sense of style on the streets helped turn the Italian sportswear company into a household name across the globe.

Today, this era lives on in Diadora‘s Lifestyle lines. Designed and created at the label’s Caerano di San Marco headquarters and factories, Diadora‘s “Made In Italy” ethos and know how is not just rooted in Italian craftsmanship but is also a check on the oversaturated sneaker market. And while originals can still (occasionally) be found in places like 80s Casual Classics and Too Hot Limited, you can experience 21st century Italian craftsmanship direct from Diadora.

Diadora celebrates its 70th anniversary in 2018. We’re marking the occasion with a years worth of features and films about those key moments the brand was a part of. From the early football casuals of the ’70s and ’80s through to the impact of Björn Borg’s wardrobe on the way we dress today, we’ll be celebrating the ways in which Diadora has subtly impacted streetwear, fashion, and culture into the present day.

Packer & Diadora Have Saved the Best For Last With Their Made in Italy N.9002
SelectssponsoredDecember 18, 2019