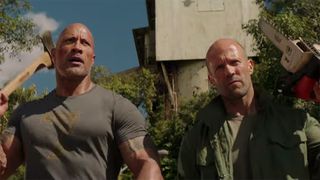 With a new chapter in the Fast & Furious franchise set to unfold later this summer, today we receive the final trailer for Fast & Furious Presents: Hobbs & Shaw. Dwayne Johnson and Jason Statham reprise their roles as Luke Hobbs and Deckard Shaw in the action film, which also stars Idris Elba.

Allow me to reintroduce myself. Enjoy the new @HobbsAndShaw trailer.
See ya in theaters AUGUST 2ND 🌎pic.twitter.com/nPFinC1KbE

The new trailer spotlights former enemies Hobbs and Shaw as they are forced to team up against a cyber-genetically enhanced anarchist named Brixton (Elba), who now posses an insidious bio-threat with the power to alter humanity forever.

Vanessa Kirby stars alongside Johnson, Statham, and Elba, portraying a rogue MI6 agent who just so happens to be Shaw’s sister. Fast & Furious Presents: Hobbs & Shaw is directed by David Leitch of Deadpool 2, as Johnson and Statham serve as producers in addition to writer Chris Morgan and Hiram Garcia.

Hobbs & Shaw is due out in theaters August 2.

Dwayne Johnson Confirms That ‘Hobbs & Shaw 2’ Is in the Works
MoviessponsoredMarch 31, 2020

Everything We Know About the Upcoming Joe Exotic TV Show
MoviessponsoredMarch 31, 2020
What To Read Next
Load More
Search Results
Load More