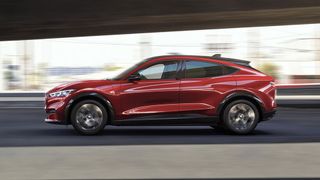 Ford has given its marquee muscle car an electric overhaul and it looks as though the new Mach-E SUV will give Tesla a run for its money when it launches late next year.

In a ceremony on Sunday that preceded the Los Angeles Auto Show, Ford unveiled its powerful new hatchback. It’s the manufacturer’s first long-range electric car. With an estimated 459 horsepower from two electric motors, Ford claims that its zero-emission muscle car has the power to take on Porsche.

According to the Mach-E’s chief engineer, the base all-wheel-drive Mach-E “can beat a Porsche Macan SUV from zero to 60 miles per hour” and the 450-horsepower GT version comes “very, very close” to a Porsche 911 GTS.

It’s expected to share much of the same engineering as the Tesla. It also features a Tesla-like front-trunk as well as keyless activation which can be operated via a smartphone app.

Elon Musk responded to the unveiling with a congratulatory tweet that suggested Ford’s newest muscle car would encourage other carmakers to go electric.

Congratulations on the Mach E! Sustainable/electric cars are the future!! Excited to see this announcement from Ford, as it will encourage other carmakers to go electric too.

Watch What Happened When Tesla’s Cybertruck Challenged Ford’s F-150 to a Tug-Of-War
DesignsponsoredNovember 26, 2019