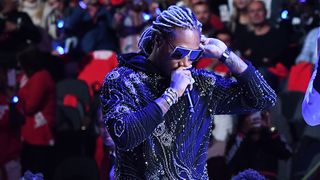 Future has yet to announce a new project following his January 2019 release of The WIZRD, however, the Atlanta musician is back with his second release of the month, teaming up with Bryson Tiller for “Wonderful.” The drop follows Future’s recent collaboration with Lil Durk, which arrived less than two weeks ago.

It’s worth pointing out that Tiller initially shared the song back in June, but a wider release has not been issued since. Future in turn just uploaded the collab to his YouTube page yesterday.

Again, this accounts for Future’s second release during the month of November, leaving fans wondering if a new project is in fact on the way. The collaboration with Bryson Tiller arrives as Future made his classic 2014 mixtape, Monster, available on all streaming platforms roughly a month ago.

As always, be sure to check back with us for more.