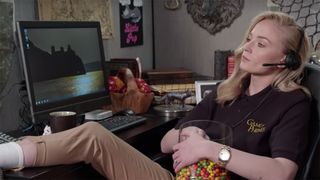 In case you’ve been living under a rock, Game of Thrones is officially back for its eighth and final season. Following Sunday night’s season premiere, a number of cast members took part in a hilarious sketch for Jimmy Kimmel Live!.

Titled “Game of Phones,” the skit features GoT favorites Sophie Turner, Lena Headey, John Bradley, Joe Dempsie, Maisie Williams, Kristian Nairn, Iwan Rheon and Liam Cunningham as they man a hotline assisting fans with their pressing Game of Thrones questions, because let’s face it, the show can be inexplicably difficult to keep up with at times.

We find one caller asking who killed Joffrey, while another goes so far as to solicit advice for having a crush on their brother, to which Lena Headey replies, “If he’s hot, go for it.”

Press play above to watch Jimmy Kimmel’s “Game of Phones” sketch, then head here for all the references you may have missed from the Game of Thrones season eight premiere.

Here’s What the ‘Game of Thrones’ Cast Really Thought About the Final Season
MoviessponsoredMay 20, 2019