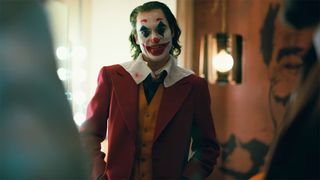 As teased in the six new clips from earlier in the week, the second and final trailer for Todd Phillips’ Joker is officially here. The nearly two-and-a-half-minute clip provides even more backstory as to why and how Arthur Fleck transforms into the villainous character.

Joaquin Phoenix stars as Arthur Fleck in the much-anticipated Joker film, as Fleck struggles to find his place in Gotham’s fractured society. Fleck is an aspiring stand-up comic, but to make ends meet, he dresses up as a clown-for-hire during the day. Down on his luck, he always finds himself at the wrong end of every joke and every bad situation, until one questionable decision ushers in a chain reaction of life-altering events that ultimately leads him to become the Joker.

Everything You Need to Know About Joaquin Phoenix’s Awesome ‘Joker’ Suit
StylesponsoredOctober 10, 2019

Here’s Everything We Know So Far About Joaquin Phoenix’s ‘Joker’ Origin Movie
MoviessponsoredApril 10, 2019