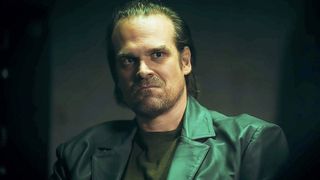 In the midst of all the Joker craze, Saturday Night Live has enlisted David Harbour to play Sesame Street‘s Oscar the Grouch re-imagined as a Joker-esque anti-hero. Watch the hilarious trailer above.

In the trailer, the Stranger Things actor becomes a garbage man named Oscar, who loves trash and is frustrated with how bad Sesame Street has become. Here, all your favorites Sesame Streets characters have fallen on hard times — Elmo gets arrested by the police, Big Bird is a stripper, the Count is addicted to pills, Ernie gets stabbed by a thief, and a homeless Cookie Monster is begging for cookies.

With Joker being a huge success, it was only right for Saturday Night Live to drop their own parody. The movie has broken the record for the biggest October opening weekend of all time, grossing $93.5 million in the US alone.