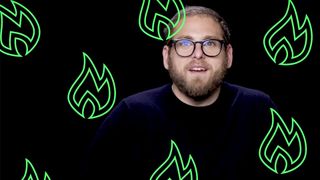 Hill’s deep appreciation for the genre is apparent throughout the video, answering simpler questions such as “Which member of Wu-Tang Clan raps the hook on “C.R.E.A.M.”?” to the more niche, “What duo rapped about ‘Luchini pouring from the sky’ in 1997?”

The quiz — if you hadn’t guessed already — surrounds the score for Hill’s directorial debut, Mid90s, which includes many of Hill’s favorite hip-hop tracks. In an earlier interview, he told Genius: “A big reason I made the film is because hip-hop, like skateboarding, is always misused in film. It’s always shown someone driving through the hood or popping champagne. To me, it’s the emotional backbone of my growing up.”

Hill continued, “So, I needed to make a film that could elegantly portray that [A Tribe Called Quest] is to me what the Beatles were to my parents. To actually make a film that shows even fancy people that this is a real art form. This is real art. It’s going down in the catalog with classical music 100 years from now, and DJ Premier is Mozart.”

Are you surprised by Hill’s music knowledge? Let us know in the comments.