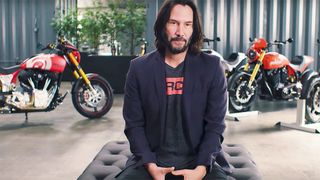 Keanu Reeves walks us through his obsession with motorcycles in a new video courtesy of GQ, enthusing about the bikes he rode in film series such as The Matrix and John Wick, as well as telling us which models are his favorites, how fast he rides, and his two-wheeled grails.

The 54-year-old actor takes us behind the scenes at Arch Motorcycle, the motorbike manufacturing company he created in partnership with customizer Gard Hollinger in 2011. It’s here where Reeves’ passion for bikes shines through, as he discusses the Arch motorcycles currently in production, the custom elements, how involved he is at the company, and Arch’s general ethos.

“We do a lot of riding,” Reeves says. “We go to Arch events and ride all through the Santa Monica mountains.” As for the bikes on his bucket list, he wants to try out the 1955 Vincent Black Shadow, 1927 Brough Superior, and modern MotoGP superbikes. “That’d be pretty awesome,” he says.

Watch Reeves in his element in the video above.