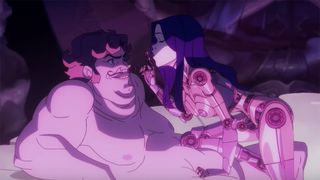 Love, Death + Robots consists of 18 NSFW animated stories, each clocking in anywhere between 5 and 15 minutes. As alluded to in the title, the shorts all fall into one of three categories: love, death or robots.

The official trailer for the program is considerably aggressive, with fast-paced sequences backed by heart-pumping industrial music. Love, Death + Robots is scheduled to arrive on Netflix on March 15, as Fincher is gearing up for season two of his serial killer Netflix series, Mindhunter.

Let us know if you plan on tuning in.

A Teenage Girl Is Raised by a Robot to Repopulate Earth in Netflix’s ‘I Am Mother’
MoviessponsoredMay 9, 2019