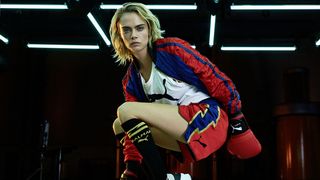 PUMA and Balmain have come together for their first-ever collaboration, designed by Balmain creative director Olivier Rousteing and his friend and muse, Cara Delevingne. While Delevingne has been working with PUMA since 2016, this is her debut collection with the brand. Additionally, Delevingne and Rousteing have teamed up multiple times in the past, as the English actress/model has starred in Balmain campaigns and videos, as well as walked in runway shows.

“Cara is a good friend, and this is the fruit of a shared vision,” says Rousteing. “Everyone involved—PUMA, Balmain, Cara and me—was determined to create something timeless. Above all, we knew that our message needed to be a strong one, reflecting exactly who we are and what we believe in.”

Delevingne added, “PUMA has always represented team work and empowerment so the idea of doing a partnership with Olivier seemed very fitting. Balmain has a similar brave fierceness to their brand as PUMA does and it really excited me to think of what we could all do together. I’m really proud of what this collaboration has resulted in.”

PUMA is producing one particular assortment of apparel, footwear, and accessories that will be sold in PUMA stores, online, and select retailers, while Balmain will make various items available at its boutiques. An additional collection of six pieces produced and distributed by Balmain will be shown as a part of the house’s Spring 2020 designs and sold at Balmain stores, online, and select retailers.

You can get a glimpse at the PUMA x Balmain x Cara Delevingne collection via the boxing-inspire campaign teaser above. The complete video and photos will arrive later this month, as the collaboration releases November 21.