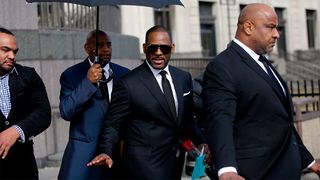 Back in February, R. Kelly was charged with 10 counts of aggravated criminal sexual abuse involving four victims, three of whom were minors. Until now, the fourth victim was known only as L.C. Earlier today, Lanita Carter broke her 16-year silence on CBS This Morning.

In an interview with Jericka Duncan, Carter explains that before the assault, she was defending Kelly against the accusations, telling people, “Perfect gentleman. Pray for him, he is nothing like what they say.” Carter was Kelly’s hairdresser at the time.

She then details what happened on February 18, 2003. You can hear the harrowing story in the video above. Despite Carter going to the police on the same day, and Kelly’s DNA evidence being found on her shirt, charges were not filed.

10 months after the incident, Carter was paid a $650,000 settlement to keep quiet, though Kelly denied any wrongdoing. Then, in 2009, he released a song about having sex with a woman who braids his hair, which led to another confidential agreement, this time for $100,000, to stop performing the song and to never include it in future albums.

Carter explains that she kept seeing news about Kelly’s victims, and then saw a plea from Cook County State’s Attorney Kimberly Foxx, asking victims to call her office, after Surviving R. Kelly aired. The final push for Carter to tell her story publicly, however, was the interview Kelly did with Gayle King.

She finishes the interview saying, “I know that I love myself today, I know that I don’t care what anybody says about me… This is a release. I’ve been carrying this since 2003. I don’t wanna be in the public, this is my life. If I die tomorrow, I know that I told the truth.”

If you have been sexually harassed or assaulted, there are resources to help you.

The 25 Best Music Documentaries to Stream & Where to Watch Them
MoviessponsoredJune 11, 2019
Follow
Highsnobiety Music
What To Read Next
Load More
Search Results
Load More