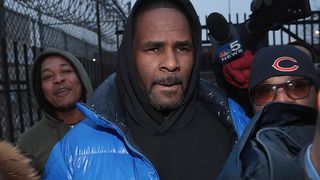 R. Kelly has given his first interview since his arrest on 10 counts of aggravated criminal sexual abuse. A week after the singer posted bond and emerged from Cook County Jail, he sat down with Gayle King on CBS This Morning to vehemently deny all the accusations against him. The interview finds Kelly quickly becoming passionate in his self-defence, stating “Whether they’re old rumors, new rumors, future rumors — not true.” Shortly after that segment aired, Kelly was arrested again for unpaid child support. Since then, CBS has released footage of Kelly explaining his financial situation (apparently he has roughly $350,000 left in his bank account) and refuting the abuse allegations made by his ex-wife.

In the previous interview, Kelly also addressed Lady Gaga’s recent disavowal of working with him on their 2013 single “Do What U Want. “The interesting thing about this is the fact, working with Lady Gaga, she’s a very great talent and all,” he said. “It’s unfortunate that her intelligence go to such a short level when it comes to that.”

An additional interview with Azriel Clary and Joycelyn Savage, the women who currently live with R. Kelly, is now available to view on CBS as well. Kelly has pleaded not guilty to all of the charges against him. For a full timeline of the allegations over the years, head here.

If you or someone you know is a victim of violence, threats, or abuse at home, there are organizations you can contact for help and advice. Visit The Hotline in the US and the National Domestic Violence Helpline in the UK for more information.

The 25 Best Music Documentaries to Stream & Where to Watch Them
MoviessponsoredJune 11, 2019
Follow
Highsnobiety Music
What To Read Next
Load More
Search Results
Load More