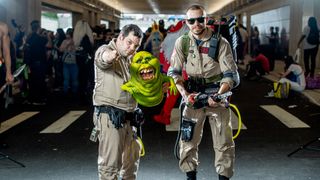 Get ready to experience Ghostbusters in augmented reality. To celebrate the film’s 35th anniversary, Sony is giving fans the chance to become Ghostbusters at the Ginza Sony Park in Tokyo with new AR event.

Lucky participants will wear an AR headset around the park to exterminate ghosts that appear throughout the space. From October 12 to December 8, Sony will host four sessions per day for the free experience. However, for those who sign up, names will be picked randomly. The experience is also only conducted in Japanese.

Alongside the event, the iconic film is coming back to theaters for its 35th anniversary with a lot more content than the original. The screenings will include introductions from the main cast members, new unseen footage, and alternate scenes not found in the original cut. The anniversary screening will only be shown in 600 theaters around the US.

Check out the trailer for the AR experience above and let us know if you get the chance to check it out!